During my trips to Central and South America as well as to the Caribbean countries, I have been collecting large amounts of piano pieces by composers that I never heard about. Once in a while, I also come across pieces by well known composers, many of which are not yet considered part of the pianist's repertoire. If we had to ask pianists to make a list of the ten most famous Latin American composers of piano music, most would include Astor Piazzola, Heitor Villa-Lobos, Alberto Ginastera, Ernesto Lecuona, and maybe Carlos Chavez. Many pianists would not name the next tier of composers, which would have to include Manuel Ponce, Carlos Guastavino, Octavio Pinto, Ignacio Cervantes and Manuel Saumell. It is highly doubtful that most pianists, except those from Latin America, would know Rafael Landestoy, Juan Morel Campos, Rafael Hernandez, Alfonso Leng, Luis A. Calvo, Moises Moleiro, to name just a few.

This wealth of repertoire selections is filled with semi-popular (as I call them) works that carry a specific flavor of an autochthonous region, province or other part of the country of origin. Pieces called Danzas, Danzones, Valses, Joropos, Pasillos, Tangos, Cuecas, etc, are more accessible and understandable to the general public than say, for example, the larger, more complex European forms, such as Sonata, Concerto, Quartet, or other similar forms. As a whole, it seems like an ideal repertoire to expose and introduce new audiences to classical music, which is why I have made the music of Latin American composers an important part of my repertoire.

One such composer is Rafael "Bullumba" Landestoy, born in The Dominican Republic ( in the pictures). I first met Mr. Landestoy in the 1980's at one of my concerts in New York. He handed me an envelope with copies of some of his pieces. I was immediately "touched" by his music and proceeded to record 20 of his piano works. Since that time, I have successfully performed pieces by Landestoy in many countries and I can tell how much audiences like them by the way they react and seek more details on the composer, the availability of the music, etc. The same is true of other composers such as Luis A. Calvo from Colombia, Ernesto Lecuona from Cuba, Moises Moleiro, from Venezuela and many more.

Gradually it became clear to me that I needed to record an Anthology of Latin American Piano Music, which I recently undertook. This collection of several volumes will include pieces by dozens of composers from many Latin American countries. The collection will be called "A MUSICAL JOURNEY THROUGH LATIN AMERICA" and it will have its debut this coming Fall with its first Volume, which contains piano works by Ernesto Lecuona, Heitor Villa-Lobos, Luis A.Calvo, Moises Moleiro and Alberto Ginastera. With this ambitious recording project, I am hoping to shed some light on this interesting, beautiful, rich, but neglected repertoire.

As always, my goal is to gain and recruit new audiences to classical music, and by doing so, add some new and exciting repertoire choices for pianists. I will keep my friends, followers, fans posted on this project and hope that you will help promote this music once it is out. 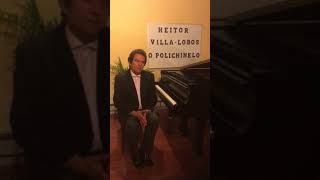 Welcome to My Personal Journey